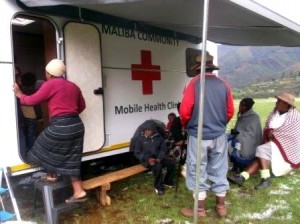 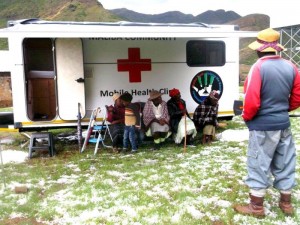 Post by Trust manager, Daniel. (Written in his second language)

The clinic trial was held at St Felix, Ha ‘Mali as it was agreed to with the nurses and directors. Fom the lodge we hooked the caravan to the Camry and the driver was City. He drove very slowly from River Lodge to the park gate on the gravel road.

We stopped at St Denis bus stop to leave the caravan and drove up to fetch the nurses with their stock. We found them and they were only three nurses that work at St Denis. We loaded lots of stuff for them to stock the clinic. Getting at the bottom, we hooked the clinic and then left to Ha ‘Mali. Immediately when we got there ,the people arrived because they were already informed about it being there. The nurses stocked the shelves with every thing they need and started the duty. But after some minutes, there came heavy storm accompanied  by lightening, wind and hail. For protection some people went inside the school building while others,squeezed in the clinic until the storm stopped and then service continued though it was cold due to hail. I was amazed to see that the nurses know their work because the clinic was well stocked and as the patients arrived they were served with everything in accordance with their  diseases. But for special treatments, they were told to go straight to St Denis  clinic on particular days.

The nurses helped the patients with treatment of: high blood pressure, HIV/AIDS Tests and many other different diseases. Really,the service there was so nice and amazing. But for children the nurses said they will arrange another day only for them. This means they didn’t serve children yesterday. They managed to help ten men, fifteen women and two children beyond six years.

The people there were extremely happy by the clinic and said they will save money used for transport for other reasons. They said taxi fare from Ha ‘Mali to St Denis is R10 and in total is R20. I laughed a lot to hear somebody saying,”I was suppose to go to the clinic this coming Friday  and I have saved today because I found a doctor nearby. With this R20 I’m going to buy cooking oil.” Everybody laughed and it was so funny! They said they wish if possible may this clinic be sustainable until they die and no more trips to St Denis. They even asked the nurses when will they come back again and they said next year because this was just a trial. Moreover, nurses said now it is Christmas holidays so they also will be off a while.